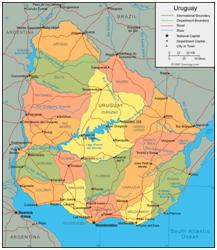 2. Sustained growth and high rate of foreign investment in relation to GDP.

The commerce and investment regime of Uruguay is open, with few border restrictions and a limited use of non-tariff measures.

4. Access to MERCOSUR, a free trade zone with a GDP of US$ 2.5 billion, which also includes Argentina, Brazil and Paraguay.

5. Excellent cost-benefit relation of the workforce of the region, due to the high skills of its human resources.

6. First level infrastructure, with Montevideo as a regional "hub" in South America.

7. Time zone located between the United States and Europe, being a good complement for the delivery of global services.

8. Uruguay has a high standard of living, an agreeable climate and environment, and a high educative level.