Yekaterinburg is a dynamic market eager for Latin American products and investments. 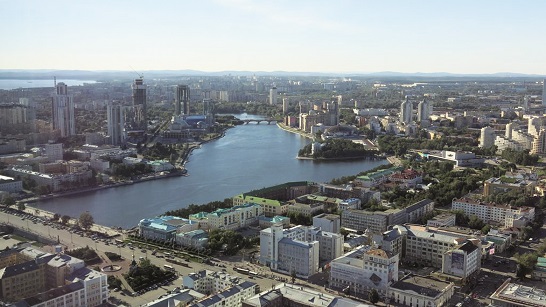 Russia is open for business, with 140 million people keen to consume. But, not everything happens in Moscow or St. Petersburg. Russia’s third city, Yekaterinburg, located east of the Urals, the mountain chain that divides Europe from Asia, is settled in one of the nation’s most mineral-rich regions and opens the door to Russian Asia. A flourishing city with a dynamic economy is looking to Latin America for its most emblematic products. “Each Russian region is a country in its own,” said to Latin Trade Osvaldo del Campo, CEO of Galileo, a CNG gas compression system company based in Buenos Aires, with business in different parts of the country.

And Russian imports just keep on growing. Consumers are eager for foreign goods. They’re looking for foods that are exotic or of better quality, tools, machinery, mass-produced or designer consumer goods, everything the world has to offer. And they can pay for them.

Imports have grown from less than $5 billion per month in January 2004 to a crescendo of $28.8 billion in September 2013, and the graph is still pointed north. Where does Latin America fit into all this? In 2012, its sales there barely reached $12 billion, out of a total of $316 billion imported into Russia. Most of those imports went to Moscow or St. Petersburg, leaving a vast market wide open in the rest of the country. That’s the situation in the Federal District of the Urals, one of the eight districts into which Russia is divided, and one of the nation’s richest mining and industrial areas. Within this district, the region posting the strongest growth is Sverdlovsk, whose capital is Yekaterinburg, Russia’s third largest city.

Latin America’s trade with the Sverdlovsk region is very small: it was barely $350 million in 2012, and most of that was in basic products.

“The level of development of the Russian capital and St. Petersburg is well beyond ours, but we’re closing the gap,” Vladimir Solovarov, Sverdlovsk’s vice minister of international relations, told Latin Trade. “The rates of industrial growth here have been four times higher than the national average in recent years. The region of Sverdlovsk and Yekaterinburg is in third place in Russia for volume of industrial production, trade, and square meters occupied by supermarkets,” he added.

Sverdlovsk is also working to develop incentives for companies to invest in its territory. “We know the conditions Moscow can offer can be very favorable at the start-up stage, but later on the costs are much higher,” said Andrei Becedin, president of the Ural Chamber of Commerce, based in Yekaterinburg. “Moscow can be two or three times as expensive.”

And, added Solovarov, “Yekaterinburg is an industrial and logistical center for the most easterly part of Russia. It’s not worth the trouble to go to Moscow or St. Petersburg to buy products and take them to the cities of Siberia.”

Businessmen in Yekaterinburg are interested in setting up trade contacts with Latin America. “Now we are trying to open up the Sverdlovsk region to Latin America because it’s not well known there,” said Zhanna Belayeva, a business consultant and director of the Center of Research for Excellence in Global Social Responsibility at Ural Federal University. Belayeva also told Latin Trade there are plans for export in “optical and mechanical goods, and medical infrastructure and instruments.”

Early in 2013, the Ural Chamber invited commercial representatives from Latin America to a round of negotiations, and consular officials from Argentina, Brazil, El Salvador, Nicaragua and Ecuador attended.

“Latin America is becoming a partnership strategy for Russia,” said Belayeva. Becedin finished the thought: “Our products don’t compete there,” he said. “The strength of Sverdlovsk is in metals and metallurgical products, such as pipes or rails for railway lines. But, in addition to simple metals, the region works with more valuable metals like copper, aluminum and titanium, and is a leader in this.”

Traditionally, Latin American exports to this region in the heart of Russia have been food, especially fruit such as bananas, oranges, grapefruit and pineapples. But the region is open to buy meat, coffee, sugar, flowers, and many other products. From Buenos Aires, Matías García Tuñon, coordinator general of the Argentina-Russia Chamber of Commerce and Industry completed the scene. “They are consuming more and more. It’s a curve, not a straight line,” he said.

In the World Bank report Doing Business 2014, Russia improved 20 places to number 92, and in the World Economic Forum’s Competitiveness Index for 2013-2014, the country places 64th out of 144, having moved up three positions in the last year.