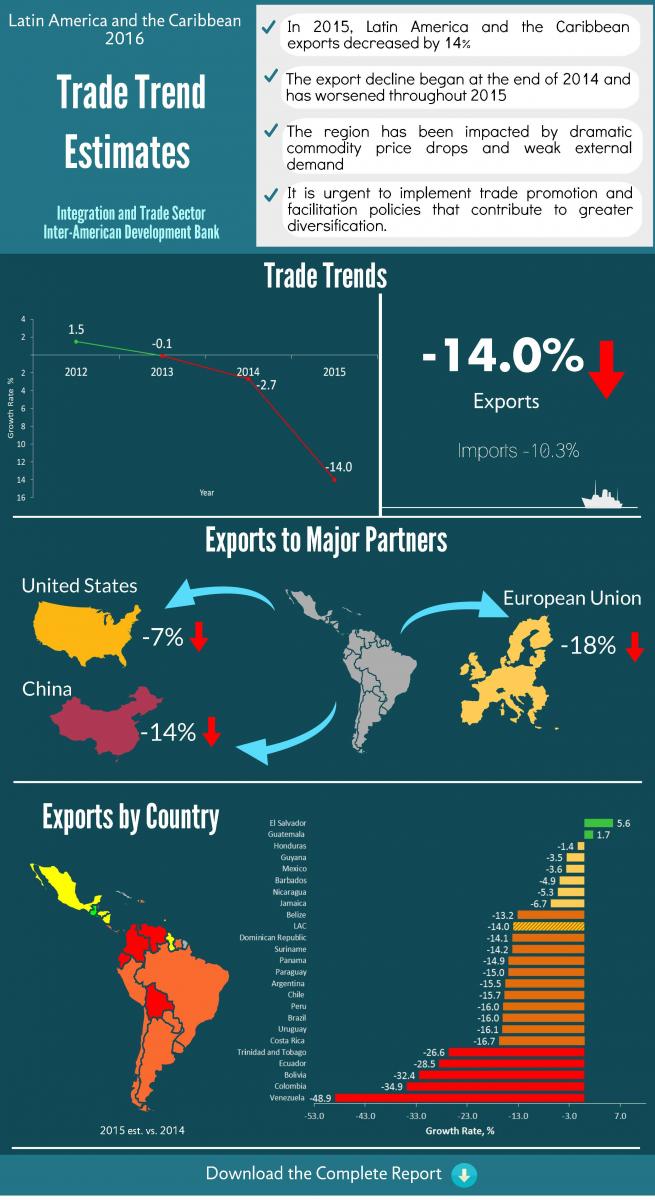 Exports from Latin America and the Caribbean will drop about 14 percent in 2015 due to a steep decline in prices and weak demand for the region’s main exports from key trading partners, according to a new report from the Inter-American Development Bank (IDB).

The IDB’s “Latin American and Caribbean Trade Trend Estimates 2016” annual report notes that exports dropped for the third year in a row, with the decline intensifying and spreading to virtually all nations in the region. Only two countries posted positive, albeit moderate growth, while in most of the economies the drop in overseas shipments exceeded that of the rest of the world.

“This trade contraction, which is the worst since the 2009 collapse, is a wake-up call on the need to implement export diversification policies,” said Paolo Giordano, Principal Economist of the Bank’s Integration and Trade Sector and coordinator of the report.

Oil-exporting countries were affected the most by the sharp drop in petroleum prices. Venezuela and Colombia posted the biggest contraction rates, followed by Bolivia, Ecuador, and Trinidad and Tobago. El Salvador and Guatemala were the only two countries where exports rose, due to a strong increase in their sugar shipments to China.

The report includes detailed data from 24 countries in the region. For the first time, it includes data from six Caribbean nations: Barbados, Belize, Guyana, Jamaica, Suriname, and Trinidad and Tobago.

The region’s trade performance reflects a sharp drop in the prices of major commodities. Prices of basic products such as soybeans, sugar and coffee declined between 20-25 percent in 2015. Prices of energy goods such as oil, and minerals and metals, including iron ore, fell by about 50 percent.

The trade decline also stems from a weakening in demand from the region’s main trading partners. For the region as a whole, the worst declines occurred in trade with Asia (excluding China), which fell 19 percent, with the European Union (-18 percent), and in intraregional flows (-19 percent). Exports to China plunged 14 percent, while expectations of a rebound of exports to the United States were neutralized mostly by a drop in the value of oil, which resulted in sales to that country shrinking by 7 percent.

The report notes that economies of the Caribbean and South America were the most affected over the course of the year, with declines in exports to virtually all their main destinations, while Mexico and Central America were mostly hit from a drop in sales to the U.S. market.

The growth perspectives of regional exports in 2016 feature some risks: there are no signs of change in price trends for commodities markets, and a slowdown in economic activity is expected to continue in China and in Latin America. Stronger demand from the United States, however, could lend dynamism to exports, particularly those of Mexico and Central America. 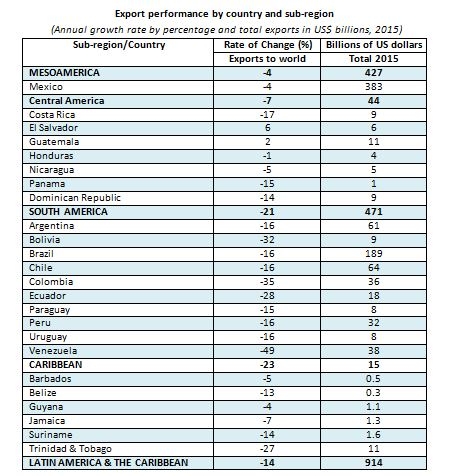 Source: IDB’s Integration and Trade Sector, based on official national sources and own estimates.